[This article is cross posted at The Urbanist.]

Bus rapid transit (BRT) proponents argue that dense population and growth centers of West Seattle are too spread out to be effectively served by one light rail line, and they’d say even a dual line wouldn’t cut it. It’s a worthy debate that has been extensively hashed out between light rail and BRT evangelists, but one piece of the debate has recently changed. In early December, conversations by Sound Transit staff and decision-makers began to consider a larger investment package for Sound Transit 3 expansion plan.

Instead of a mere $15 billion, the region may see a transit measure closer in size to $25 billion or $30 billion. Naturally, with more monetary resources comes more investment capabilities. At the same time, Sound Transit also released a comprehensive “Corridor Summary” that projected daily ridership as high as 50,000 for its “West Seattle Junction” elevated light rail option and as many as 40,000 daily riders for its Delridge Way at-grade light rail option. That’s as many as 90,000 riders combined for perhaps a $3 billion investment ($2 billion for Delridge and $1.8 billion for “West Seattle Junction” but the two lines share the cost of first three stops and the Duwamish rail bridge thereby reducing the overall cost). Of course you’d have to adjust for the first three shared stations so you couldn’t just add the numbers together. Still, these aren’t paltry ridership numbers when compared to other high performing alignments like Ballard to Downtown Seattle (up to 133,000 daily riders for a $4.7-$5.3 billion investment). 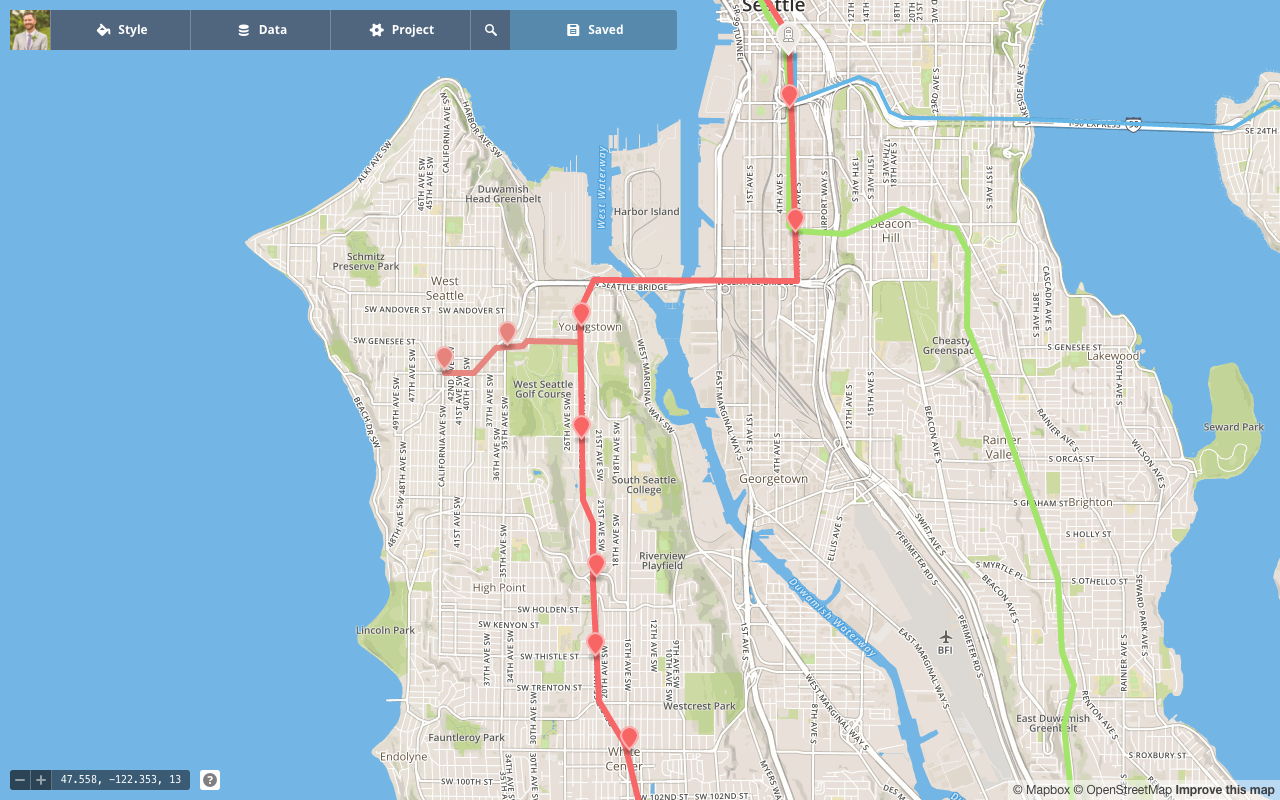 The red line is a light rail routing that I previously suggested for West Seattle; it’s a combination of the 3-A and 3-C options in Sound Transit recent study. I estimated a cost of $3 billion to do both based on Sound Transit numbers.

The skeptics would have you know that several Sound Transit Boardmembers seem to favor light rail to West Seattle and have all but promised an alignment there. They would also suggest that Sound Transit is inventing these numbers out of thin air to ensure that outcome. So who cares what the numbers say?

They might be right. The ridership numbers seem inflated.

Sound Transit should take BRT seriously and appropriately evaluate it. How much ridership would a West Seattle BRT see? How would Sound Transit handle operations? Would they build it and then hand it over to Metro Transit? The key to clarity for high quality transit to West Seattle is Sound Transit studying both light rail and BRT options extensively and honestly so we can make an informed decision.

Buses In The Next Transit Tunnel?

The utility of West Seattle BRT hinges on access to a Downtown transit tunnel to speed trips through the core. Sound Transit recently studied a second transit tunnel, and it seems more and more likely they’ll build it. The big question for BRT fans is whether they will allow buses in the tunnel if built.

Bus and rail already share one transit tunnel in Downtown Seattle, but that relationship has been tenuous at best. Bus operations have always been relatively slow in the tunnel. Increasing Downtown bus trips and combination of new light rail service necessitated the permanent elimination of some routes from the Downtown Seattle Transit Tunnel early on. Then in 2012, the Ride Free Area was ended and threatened increased average boarding times for buses. Metro responded by platooning buses and hiring staff to load buses via the backdoor with mixed results. Subsequent rounds of service changes have kicked more and more buses out of the tunnel and onto city streets, but buses may hang on until the early 2020s before being fully eliminated from the tunnel. In the meantime, light rail service in the tunnel is regularly delayed by bus operations.

Sound Transit likely doesn’t want to unnecessarily recreate such poor service delivery. But if buses are denied access to a transit tunnel, we’d have to assess how rapid BRT to West Seattle could effectively work through Downtown Seattle.

Much of West Seattle’s light rail long term viability hinges on growth. Skeptics say West Seattle simply won’t grow enough to justify light rail investment. Underlying this is the assumption homeowners and neighborhood activists will block changes in zoning and impede development. They might be right, but the irony is that the BRT crowd is perfectly willing to talk politics when it supports their point on land use (i.e., NIMBYism will prevent West Seattle from ever growing into a community large enough to support light rail). On transportation, however, they don’t want politics to factor into a sober assessment of transit quality. They say BRT could serve more of West Seattle and Delridge with one seat rides for much cheaper, so we should just dismiss some people’s stated preference for rail as a frivolity. At least in Sound Transit’s survey, West Seattle elevated light rail had strong support, getting more votes than any other listed project. If we think we can overcome rail preference to sell BRT to West Seattle, I expect we might be able to sell them on zoning changes too. 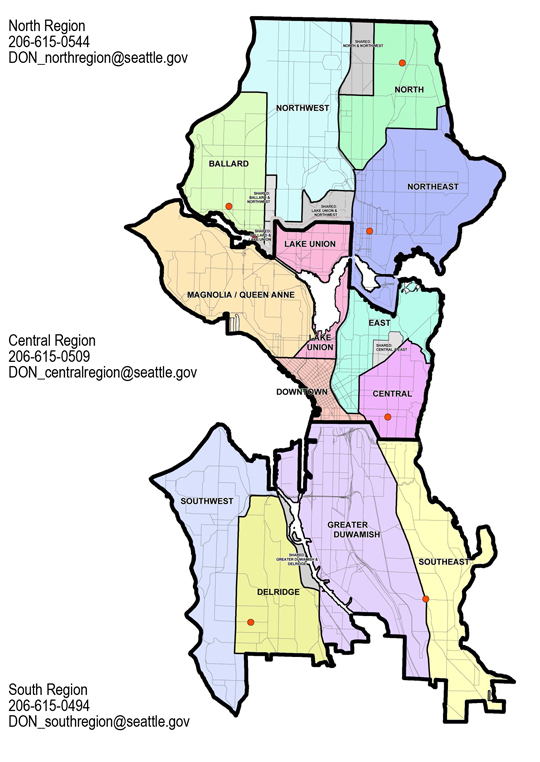 This is how the City of Seattle roughly delineates its neighborhood communities for statistical purposes, although the 2010 census data may represent a slightly different region. (City of Seattle)

West Seattle and Delridge are growing steadily, although nowhere near as rapidly as the incredible rates achieved in Downtown and Lake Union. From 2000 to 2010, West Seattle grew by 4.6% while Delridge grew by 6%. Recent data from The Seattle Times, showed continuing growth concentrated most heavily around Avalon and Alaska Junction. Moreover, a quick glance at Seattle in Progress confirms that more than a dozen big projects are on the way. 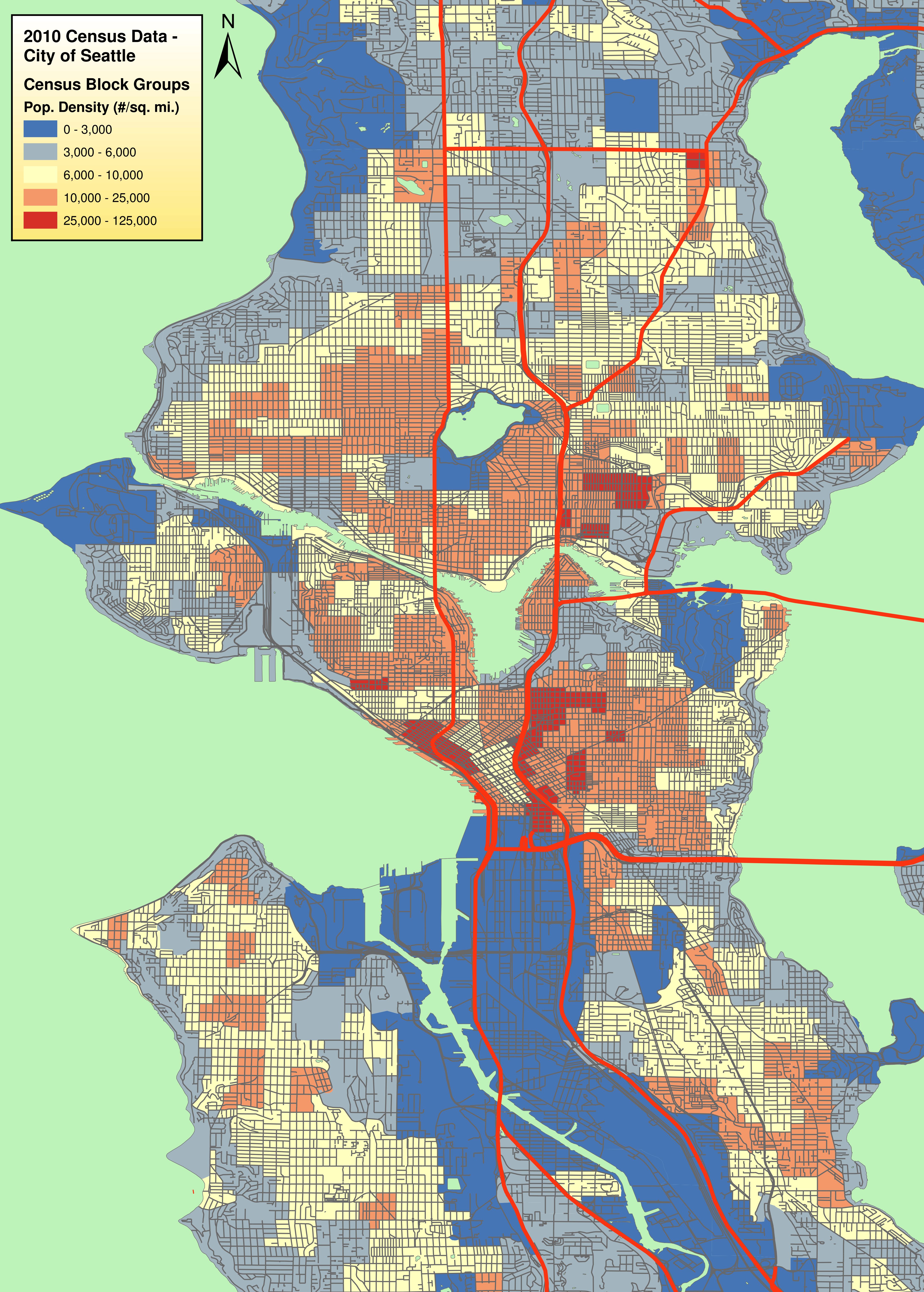 Chad Newton at Build The City blog made this nifty density map based on 2010 census data. As you can see, West Seattle has only a few sections in the orange (10,000 to 25,000) density level. (Chad Newton)

BRT proponents say that even if West Seattle grows significantly, its transit demand still won’t catch up to denser areas in the central core of the city or the dense urban swath found from Ballard to the University District. That may be, but this doesn’t have to be an either/or proposition.

Hypothetically, West Seattle and Ballard both could get light rail. We could even build the Metro 8 Subway if we lobbied Sound Transit hard enough. Sound Transit could also help Metro upgrade its most successful RapidRide line — the E Line — to as close to full BRT as possible. The E Line (Aurora Village) reached 15,800 weekday rides in 2015 and leads the RapidRide pack by far; this seems an obvious place to invest further. Adding more BRT lines than just a hypothetical West Seattle line would also avoid accusations of favoritism, and it’d spread ST3 benefits across a wider area.

Maybe BRT will ultimately be the best solution for the West Seattle peninsula, too. But at this juncture, we need to study both light rail and BRT options further to evaluate their costs and benefits.