It’s easiest to document the changes taking place outside your own window, which for me looks out on Woodland Park Avenue and Stone Way. From my vantage alone, I can see two large construction sites. Frelingford is undergoing a transformation.

What is Frelingford, you ask? Well that’s the name some people use to refer to our neighborhood: the nether region between Fremont and Wallingford. Officially, our apartment on Woodland Park Avenue is in Fremont, but, since Stone Way divides the two booming neighborhoods, Wallingford is just a block away. It feels like we have a foot planted in each neighborhood. I’d contend the area between SR-99 and Interlake Avenue is Frelingford; plus I’d even claim Wallingford’s southern peninsula below N 35th Street, an area more than ten blocks from Wallingford’s main business district on N 45th Street.

Frelingford is a boot shape neighborhood with the inclusion of the Gas Works Park area. (Graphic by Justin Roth)

Within a block or so of Stone Way also happens to be where much of the latest round of growth in both neighborhoods is taking place, particularly the largest mixed use projects. Perhaps, the Stone Way district will even begin to rival’s Wallingford’s 45th Street commercial district and Fremont’s busy 36th Street business strip. Many projects do include first floor commercial space to lend new additions to existing mix of restaurants, coffee shops, and retail.

Kitty corner from me, a full block mixed use building has sprouted at 3801 Stone Way including 278 apartments and 8,215 feet of commercial space.

Stone Way Apartments will include six commercial spaces at street level. The building is still partially curtained but appears to be nearing completion. (Stone Way LLC)

The project at 3627 Stone Way includes 7,400 square feet of retail, perhaps for a restaurant. (Bayliss Architects)

Additionally, a potentially iconic triangular 23 unit apartment building is in the works two blocks north of us at 3860 Bridge Way. 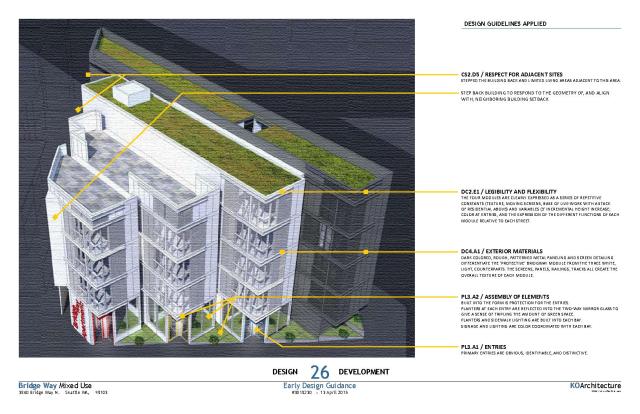 The triangular plot at diagonal Bridge Way somehow fits 23 apartments and might even do so in style by the looks of it.(KO Architecture)

On another triangular plot at 1240 N Midvale Place, a building with 30 apartments and 2,338 square feet of office space is under construction.

The 44 bus passes right by this new triangular building and will likely be heavily used by tenants since no parking is planned. (Caron)

Meanwhile, growth in the central area of Fremont seems tepid in comparison. One six story mixed use building with 48 units is replacing a smaller existing apartment building at 3519 Fremont Place N. A few town homes are going in here and there. Plus, a five story office building is replacing the current site of Milstead Coffee and Cafe Turko (don’t worry both staying open at location just up the street), and just north a five-story mixed use building with 56 apartments and 1,881 square feet of retail is going in at 743 N 34th Street.

Milstead is going back in once the new 108,777 square feet office building is done. Cafe Turko is staying at its new location. (Weber Thompson)

A 56-unit apartment building is under construction just east of the Fremont Branch Library. (B9 Architects)

Wallingford is seeing a few more new projects, but the largest are within a few blocks of Stone Way or at the far south edge near Gas Works Park, where two apartment buildings and the NorthEdge office building are under construction.

On the northern shores of Lake Union, Gas Works Park has become a gathering place for the Wallingford and Fremont communities and will soon see a lot of Tableau employees. (Perkins & Will)

Data visualization software company Tableau leased out an entire NorthEdge office building with space for 1,300 employees. The expectation of several hundred new tech hires moving to the area is a big reason Fremont and Wallingford are seeing such a dramatic boom.

Two apartment buildings  are going up two blocks east of the new Tableau office building. Designed by AMLI Residential Partners, the twin five-story structures will together they will have 239 units.

The buildings at 3400 and 3326 Wallingford Avenue will collectively 212 apartments and 27 live-work units. (AMLI Residential Partners)

Meanwhile in old Wallingford, the pharmacy chain CVS bought the building previously housing Moon Temple (and a Tully’s Coffee) at the prime intersection of 45th Street and Meridian Avenue, and, in a display of urban ineptitude, refused to put up a mixed use building and instead chose to renovate the existing one story building to get around obstruction by the neighborhood design review board.

It’s really unfortunate this corner won’t be put to better use. (Seattle Curbed)

CVS also planned to add one story suburban style stores in West Seattle and Lower Queen Anne but encountered a large backlash from neighborhood activists. Thanks to this pressure, the city council passed a minimum floor area ratio measure (a density requirement) that helped force CVS to add two additional stories to its Lower Queen Anne location. The Wallingford location is proceeding as a renovation of the existing one story building—to me the worst compromise and a skin-deep concession to historical preservation. Either leave the two small storefronts in the old building, or, if you’re going to displace them, put up something more visionary and worthy of a prime piece of land.

The 45th & Woodlawn apartments will be across the street from Molly Moon’s and fill in a gap in the streetscape. (B9 Architects)

Rounding out the big projects in Wallingford, a four story Bedrooms & More retail and office space complex is under construction at the neighborhood’s eastern edge at 324 NE 45th Street. 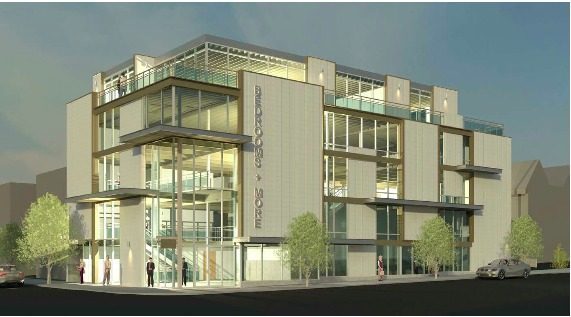 This building will function as Bedrooms & More’s showroom, its office space and the owners will even live in the fourth floor condo. That’s a very personal approach to mixed use development! (Stuart Silk Architects)

While at least 1500 new apartments have been built along Stone Way since 2012, comparatively few have gone in the central districts of Fremont and Wallingford during that time span. Why is Frelingford seeing more intensified growth than the even more bustling and high demand hearts of these neighborhoods? The answer, I think, has a lot to do with zoning and with a perceived desire to keep much of the one- to two-story retail that predominates in both business districts, not to mention not touching the sacred single family neighborhoods just a block or two off the business strip. Plus, I expect parcels along Stone Way may have been easier/cheaper to acquire as a former industrial/warehouse area already zoned for mixed use.

Both Wallingford and Fremont were deemed urban villages in the 1994 Comprehensive plan, but to a large extent zoning changes envisioned did not materialize. The 2035 Plan—which should finally be passed next year—suggests easing zoning restrictions within its boundaries within the Wallingford Residential Urban Village. As you can see below about half of the “urban” village is still zoned single family.

Seems like a good idea. (Seattle Department of Planning & Development)

Notice how the Wallingford urban village is weighted heavily to the western side and much is within the Frelingford area I’ve described. East of Sunnyside Avenue, the village’s boundaries are pencil thin, not even a full block. The Urbanist Editorial Board has recommended expanding the boundaries of high demand urban villages and mentioned Wallingford specifically:

The city needs to go further and expand the areas of urban development in urban villages and high-intensity zoning in urban centers, especially where there is extraordinary demand for housing (e.g. Ballard, Wallingford, South Lake Union, and the University District).

I like the idea of stretching the urban village’s boundaries from 43rd Street to 51st Street throughout Wallingford. That doesn’t mean all the single family homes within that boundary would be redeveloped, but it would spread the growth and hopefully allow building diversity in age and type. Moreover, 40th Street looks ripe for redevelopment since it has good bus service with Routes 26, 31, and 32, and Wallingford Avenue already has some some commercial use that could be built upon with relaxed zoning along its spine and near Gas Works Park.

The 2035 plan calls flirts with expanding the Fremont Hub Urban Village 1994 boundaries by a few blocks. Currently, 40th Street delineates the northernmost extent, but much of Upper Fremont is already zoned Low-Rise Multi-Family meaning growth could climb up the Fremont Avenue corridor, and to some extent already has. The Urbanist has recommended making Upper Fremont an urban village in its own right. Notice again, the urban village already stretches to Fremont’s far eastern edge a.k.a Frelingford. 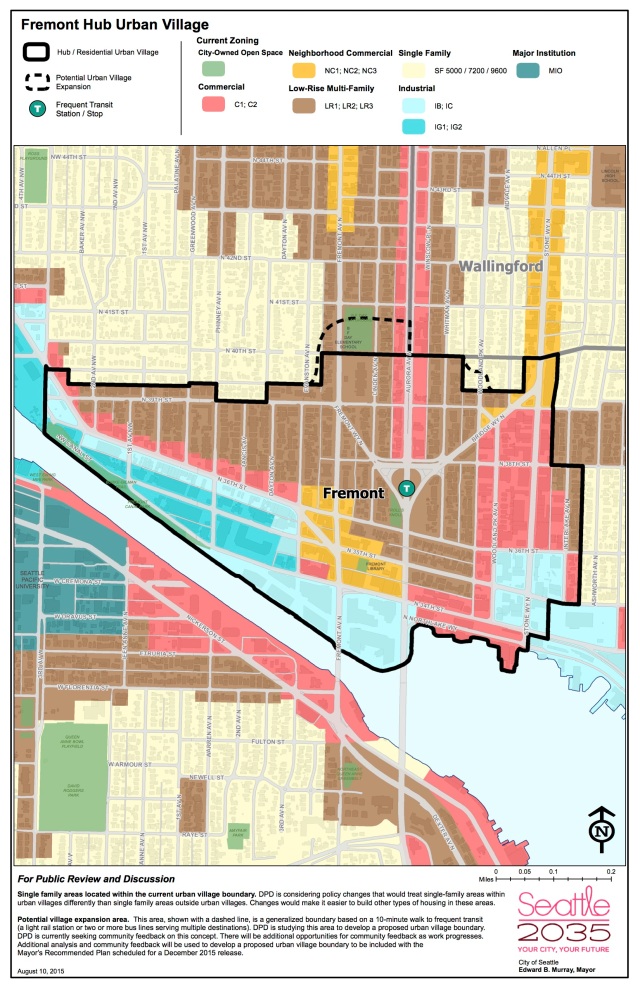 As Fremont and Wallingford are currently zoned, growth has been concentrated along the Stone Way corridor. I’ve argued this could lead to Stone Way rivaling the traditional hubs along 36th Street in Fremont and 45th Street in Wallingford. Stone Way’s mixed use growth could also lead Frelingford to feeling increasingly like a distinct neighborhood. It’s already cut off from the rest of Fremont by SR-99, and Wallingford’s business district is a long walk up the hill for those of us at the bottom. As more cafes, restaurants, shops, bars, and businesses go in along Stone Way, we in Frelingford will have more excuses to stay in the immediate neighborhood.

The development of a strong mixed-use district along Stone Way is a good thing, but it also highlights the need for zoning to allow more mixed use development in other areas of Wallingford and Fremont so that the traditional centers of these neighborhoods do not stagnate and so that even more people can enjoy the high quality of living here.

The HALA report has recommended shifting the height limits up in low rise zones: LR2 zones go from 30 to 40 feet and in urban village LR3 zones 40 increases to 55 feet. NC65 (Neighborhood Commercial 65′) would go up to NC75. These changes still need to be enacted by the city council, but doing so would allow new buildings an additional floor or two which might change the calculus in favor or redeveloping more plots. Another reason to make sure the HALA recommendations are enacted!